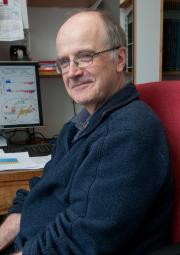 Nick started his scientific career in 1973 at LMB Cambridge when much of its famous science was in progress (e.g. work of Fred Sanger and Cesar Milstein). He worked on mRNA sequencing and discovered the AAUAAA poly(A) signal as a graduate student with George Brownlee [1]. As a postdoctoral fellow at LMB, he began a study to clone and sequence globin genes [2]. This led him in 1979 to take a postdoc position in the USA with Tom Maniatis where he cloned and sequenced various globin genes, discovering globin pseudogenes and structural details about the evolution of the α and β globin gene families in man [3,4]. Nick started his lab at the Sir William Dunn School of Pathology, University of Oxford in 1981 as a Lecturer and then Professor. He was also a Fellow and Tutor in Biochemistry at Brasenose College from 1982-2003. His research initially focused on poly(A) signals, their genetics and biology. From these studies his lab discovered that mRNA processing is coupled to transcription [5,6] which led into detailed analysis of the mechanism and biological significance of transcriptional termination. In particular, they uncovered the molecular process of transcriptional interference [7,10,13], and characterized signals and factors that mediate transcriptional termination of RNA polymerases I and II in yeast and mammals [9,11,12,15-17]. They also discovered the existence of transcription dependent gene loops associated with all tested eukaryotic genes [14] and more recently demonstrated that these structures function to provide transcription directionality [22]. They were the first lab to discover intergenic transcription in a mammalian gene locus [8] and also uncovered similar intergenic transcription in S. pombe that leads to cell cycle specific heterochromatin formation and cohesin recruitment [18]. Further studies led to the characterisation of pre-micro RNA co-transcriptional maturation by DROSHA [19,24] as well as establishing the role of helicases (Sen1 and SENATAXIN) in restricting R-loop formation in yeast and mammals [20,21,23]. More recently they have expanded their studies to investigate the extent of transcription across the human genome using various transcriptomic analyses. This has led to a genomic perspective of how transcription and RNA processing are coupled mechanisms [25]. Furthermore recent work from the lab has uncovered more detail on the mechanism of co-transcriptional splicing [26] and information about how long noncoding transcript synthesis and processing differs markedly from protein coding gene transcription [27-29].  Also, the role of premature termination in gene regulation has been recently highlighted [30]. During 40 years at Oxford Nick has had the satisfaction of seeing his research field expand from a relatively small focus into an interconnecting series of topics widely considered to be central to gene expression. He has co-organized from the late 1980s, four-yearly spaced workshops at Oxford on “Eukaryotic RNA 3’ ends: formation and function”. These have provided a major forum for the field as it has developed over the last 40 years.