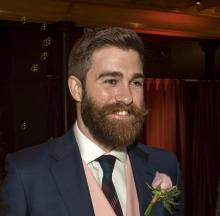 Jamie carried out his PhD at the University of Dundee, under the supervision of Professor Julian Blow. There he demonstrated that canonical S phase DNA replication is insufficient for complete genome duplication, particularly in organisms with large genomes (e.g. humans), and that un-replicated DNA is routinely transmitted through mitosis resulting in DNA damage that is repaired in the following G1 phase.

Jamie then joined Professor Conrad Nieduszynski’s lab at the University of Oxford. There he used innovative nanopore sequencing techniques to detect the incorporation of the thymidine analogue BrdU in long single molecules of human genomic DNA, thereby facilitating the first attempts to characterise the highly stochastic nature of human DNA replication.